Have some fun with Excel, and print Bingo cards for an office party, or for a game at school or home. Use these Excel Bingo Card templates, and print as many cards as you need.

In this Bingo Card template, there are three cards on the main worksheet, which is named Cards.

Each bingo card has a set of 24 random numbers, with a FREE square in the centre of the card..

On another sheet in the workbook, named Numbers, the RAND function is used, to create the random numbers for each bingo card.

On the Numbers sheet, there are 3 sets of lists, with manually entered numbers, from 1 to 75.

In the adjacent columns, the RAND function is entered, beside each of the 75 number.

On the number cells for the three bingo cards, an INDEX/MATCH formula pulls the numbers from the random number tables.

For example, this formula is used in cell E2:

It is possible that the same number might appear on all three cards, but each card uses a separate lookup table of random numbers.

Because of that setup, it is highly unlikely that all 3 Bingo cards should be exactly the same.

Print the Bingo Cards in Excel

The cards are formatted to print three per sheet, on letter sized paper.

To print the first set of 3 cards, follow these steps:

To print another set of 3 cards, follow these steps:

There is another Excel bingo card template that you can download, and it has random numbers from 1 to 100.

In the screen shot below, the first number in the O column is 100. 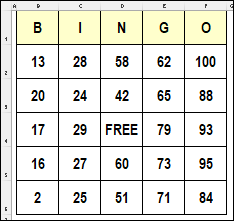 This version works the same as the original bingo card template, but the random number sheet has typed numbers from 1 to 100. 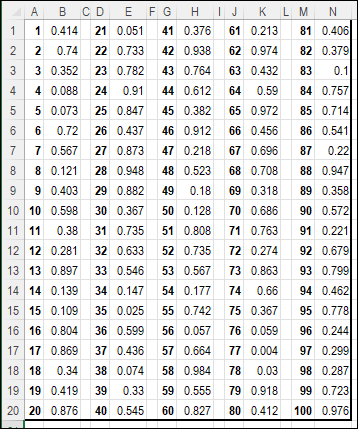 For younger people who want to play the bingo game in Excel, here is a version that uses pictures instead of numbers.

Just like the bingo cards with numbers, the RAND function is used to produce sets of 3 unique Bingo cards in this Excel template.

Then, the CHAR function converts the number to a characters, and the Webdings font is used on the bingo cards, to show the selected characters as pictures. 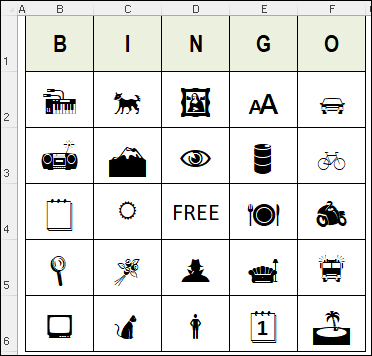 On the Webdingds sheet, I've grouped the pictures into 5 categories 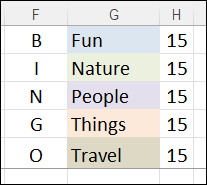 On the Webdings sheet, here is also a list of character numbers. In the adjacent column, the CHAR function shows the Webding picture for each character code.

The list is sorted by category, and then by character code within each category. 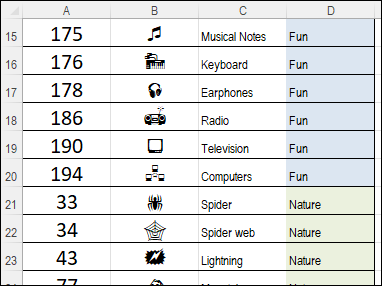 Then, on the Numbers sheet, the numbers for each category are pasted into its columns. 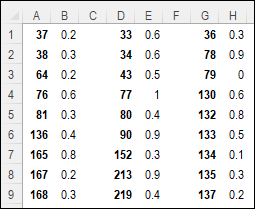 You can choose different Webding pictures for your bingo cards, if you prefer. Just change the character codes on the Webdings sheet, and the Numbers sheet.

I left out some of the really ancient pictures, like the film projector, phone modem and fax machine shown below. Young people might not know that those items are! 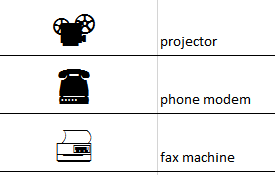 In Chip's number selector, a voice announces each number, when it is selected, and previously selected numbers are highlighted on a bingo board. 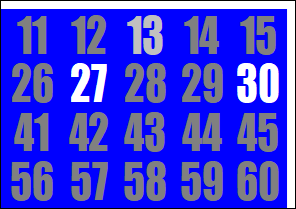