With a running total in a pivot table, you can see how amounts accumulate over a period of time, or through a range of products.

Set up the Pivot Table

Change the Base Field

To create a running total, use the Custom Calculation feature in a pivot table. In this pivot table tutorial, we'll focus on the Running Total custom calculation.

In Excel 2010 and later versions, you can also use the % Running Total calculation, to show the current running total amount, divided by the grand total.

Watch this video to see the steps for creating a pivot table in Excel 2013, then changing the values to show a running total.

Set up the Pivot Table

Below is a pivot table which contains monthly sales figures for 3 customers. In the pivot table, Date has been grouped by year and month.

Year and Customer are in the Row area, Month is in the Column area, and Quantity (Qty) is in the Values area.. 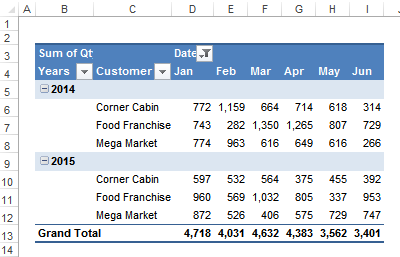 We can see the Grand Total for each month, and for each Customer.

Currently, there are only Normal calculations in the pivot table, no custom calculations.

To calculate a running total of quantity, for each Customer, over the three months, we'll change the Qty to a custom calculation.

We'll base the running total on the Date field, so the totals accumulate across the Month columns.

Note: If you select a base field that isn't in the row or column area, all the results will show an #N/A error. Also, if there's an error in any month's results, it will carry down through the remaining months. 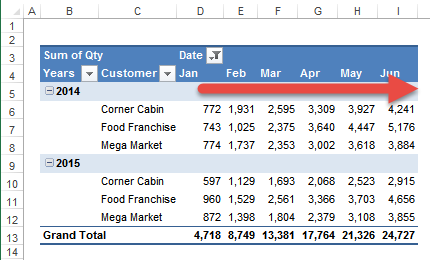 The Grand Total shows that 17,764 units were sold by the end of April, for all Customers, over both years..

Change the Base Field

In the previous pivot table layout, we chose Date as the base field, and each Month column shows a running total for the year and customer, by month.

The results are correct, but this base field is not as easily understod as the Date base field. It is more common to see totals accrue over time.

In the April column, you can see that 1,979 units were sold in 2014, after Food Franchise ordered.

You can experiment with the field arrangement, to find the layout that is easiest to understand.

In the previous example, the Year and Customer fields were in the row area.

In the pivot table below, Year has been moved to the Report Filter area, and a single year is selected. Customer is in the Row area, and Month is in the Column area.

The Qty field shows a running total, based on Month, and the report is compact and easy to read 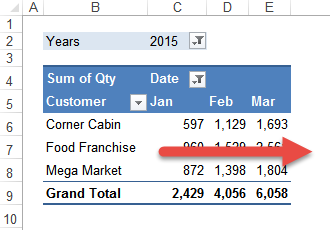 In the next pivot table, Month has been moved to the Row area, and the Qty field still shows a running total, based on Month.

This layout takes more room, and it is more difficult to compare the customers and months. 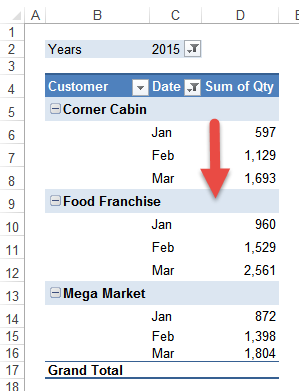 To create a running total that continues from one year to the next, you can add a new field in the source data, and use it as the base field. Watch this video to see the steps, and the written instructions are below the video.

If dates in a pivot table are grouped by year and month, the running total will stop at the end of each year, and then begin again at the start of the next year. There is no setting you can adjust to change this behavior.

To create a running total that continues from one year to the next, you can follow these steps to create a new field in the source data, and then use it as the base for the running total: 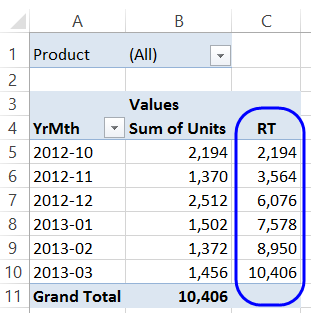 In an Excel pivot table, you can use the % Running Total calculation, to show the current running total amount, divided by the grand total. For example, combine this calculation with the Rank calculation, to see what percentage of total sales come from the top 3 products.

Watch this video to see the steps, and there is another % Running Total video below.

To follow along with this video, in the download section, get the file, "Food Sales % Running Total"

In Excel 2010 and later versions, you can use the % Running Total calculation, to show the current running total amount, divided by the grand total. Watch this video to see the steps, and the written instructions are below the video.

In Excel 2010 and later versions, you can use the % Running Total calculation, to show the current running total amount, divided by the grand total.

By June, a running total of 11426 units have been sold, and the % Running Total is 44% of the 26044 overall total units sold. To check the calculation, a formula is entered in cell G9, 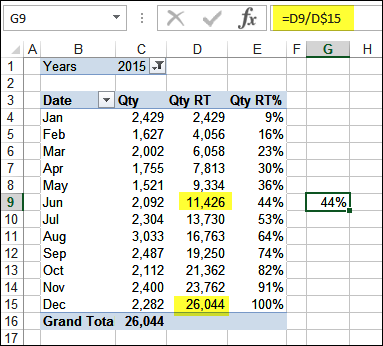 Running Total: For the basic Running Total tutorial, get the pivotsalesrunningtotal.zip file, which is in xlsx format, and does not contain macros.

Year to Year: For the Year to Year Running Total tutorial, Click here to get the sample file. The zipped file is in xlsx file format, and does not contain macros.

Food Sales % Running Total: Click here to get the food sales data file, that was used in the Percent Running Total video. The zipped Excel file is in xlsx format, and does not contain any macros.