Get Started: Dependent Drop Down Lists

In an Excel dependent drop down list, the list of items changes, depending on the value in another cell.

There are setup instructions and a video in the sections below.

In this short video, you'll see how to set up a main drop down list, with a dependent drop down list in the next column. The written instructions are below the video, and the full transcript is on the Dependent Drop Down Lists Video page.

Get Started: Dependent Drop Down Lists

Here are the step-by-step instructions for making dependent drop down lists in Excel. This example uses Fruit and Vegetable lists.

In the screen shot below, you can see the completed data entry sheet.

There are a few steps for setting up the drop down lists, and the details are in the sections below.

Set Up the Worksheets

This example will have a workbook with two sheets -- a data entry sheet, and a sheet with lists.

Next, you'll create lists with items for the drop down lists.

In this example, you'll set up 3 lists. The main list has produce types, and the other two lists have items for the dependent drop downs.

To type the lists, go to the Lists sheet. Start with the main list - Produce types.

NOTE: The Produce list has one-word items in it -- Fruit and Vegetable. This is important, because those words will be used as Excel names, and two-word names are not allowed as names. If you need to use multiple-word items in the main list, see: Using Two Word Items 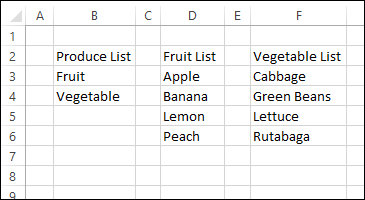 Here is the Lists sheet, with all 3 lists formatted as Excel Tables 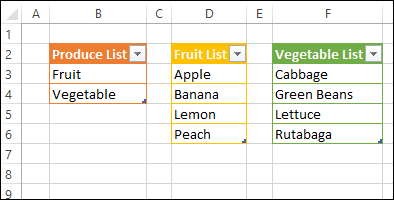 Next, follow these steps to create a named range for each formatted Excel Table.. Later, you will use this name, when making the drop down lists on the Data Entry sheet. 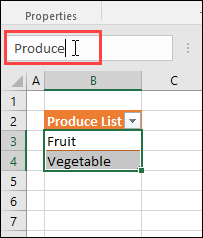 Name the Fruit and Vegetable Lists

Next, follow these steps to name the fruit and vegetable lists. 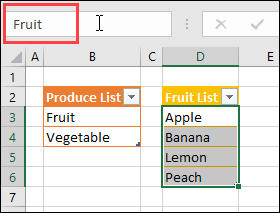 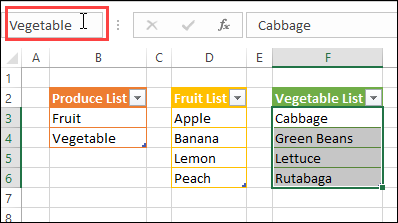 Add the Main Drop Down

Next, you'll add the main drop down (Produce Type) on the DataEntry sheet. This is just a normal data validation drop down list.

First, you'll enter headings on the data entry sheet, and set up a named table. 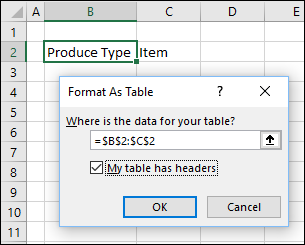 Add the Main Drop Down

Next, you'll the main drop down list, in the Produce Type column 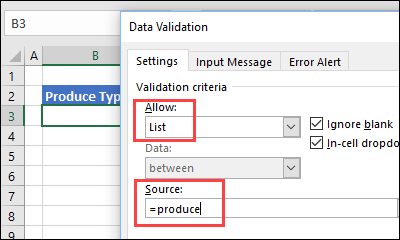 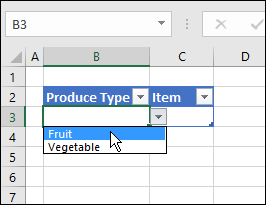 Add the Dependent Drop Down

Next, you'll create a dependent drop down list in the Item column. This cell will have a formula to create the data validation drop down list. Read more about the INDIRECT function here. 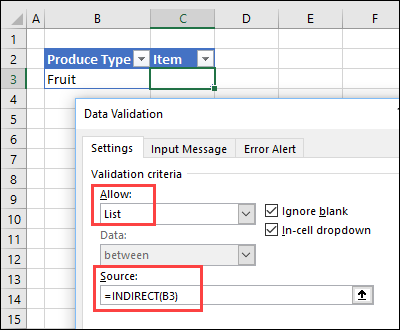 Note: If cell B3 is empty, you'll see the message shown below. Click Yes to continue.

Test the Drop Down Lists

To test the dependent drop down lists, follow these steps 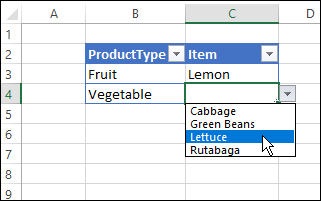 NOTE: If a Produce Type has not been selected, the Item drop down in that row will not work.

The instructions in the previous sections show how to set up a basic dependent drop down list. Here are a few advanced examples.

In some workbooks, you might need to have two-word items in the first Excel data validation drop-down list. For example, your choices are 'Red Fruit', 'Green Fruit' and 'Yellow Fruit' 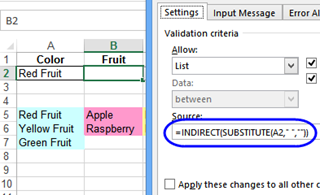 You may need items in the first Excel data validation drop-down list that contain characters not allowed in range names, such as the ampersand (&).

For example, your choices are 'Red Fruit', 'Green Fruit' and 'Yellow & Orange Fruit'. For the dependent lists, you can create ranges with one-word names, such as YOFruit. Then, create a lookup table, which lists each item in the first Excel data validation drop-down list, and the range where its dependent items will be stored.

To start, create the item lists and the first Excel data validation drop-down:

Next, you'll create the lookup table, to match each item with its dependent items' range name.

With Red Fruit selected in cell A2, the VLookup formula will return RedFruitList as the range name for the dependent list. The RedFruitList items will be displayed in cell B2's drop-down.

To create a 3rd dependent drop down list, use the same techniques, to create lookup tables and items lists.

In the screen shot below, there are lookup tables named RedFruitLookup, YOFruitLookup and GreenFruitLookup. Items lists, with the code names and "List", have been added to the worksheet. 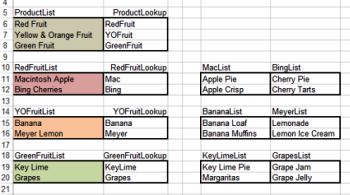 In the data validation window, use this formula for the 3rd drop down:

The formula finds the lookup table based on the product type selected in cell A2, e.g. RedFruitLook, and gets the code for the selected product -- Mac. It adds "List" to the code, and shows the items in the MacList range.

Add a Third Dependent Drop Down

To make sure that the correct list of cities appears, the city lists will be named for the country and region. There are 2 countries, and each country has 3 regions, so we will set up 6 named ranges for the 3rd level drop down lists.

NOTE: If you need more than a few named ranges for your 3rd level lists, try the Dependent Lists with Tables technique instead -- it will be easier to set up and maintain.

To set up 3-level dependent lists:

Because the INDIRECT function only works with references, not formulas, the previous method for dependent data validation won't work with lists that use formula-based dynamic named ranges, such as OFFSET ranges. Use one of the following solutions when a dynamic list is required:

To avoid the problem, use named Excel tables, instead of formula-based dynamic ranges.

Then, use one of the INDIRECT function examples shown above, to create a dependent drop down list.

If you can't use the Named Excel Tables, use the following method for creating dependent lists from formula-based dynamic named ranges:

if two-word items will be used, you can include the SUBSTITUTE function in the formula:

Dependent Drop Down With IF Formula

This is another example of dependent drop down lists in Excel, with the IF function used with INDIRECT, for a more flexible drop down. In this example: 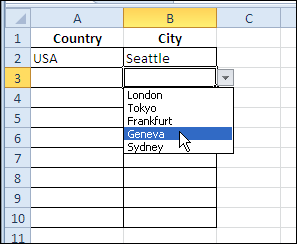 This video shows the basic set up steps, and then shows how to use the Excel IF function with a dependent drop down. There are written steps below the video, and you can download the sample file below.

In this example, there’s a drop down to select a country in column A. If you select USA as the country, cities from the USA appear in the dependent drop down in Column B. 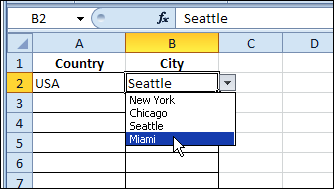 There are city lists in the workbook, and each list is named to match its country name. 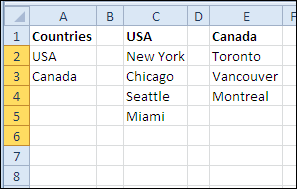 Originally, there was a simple formula for the data validation list in column B: 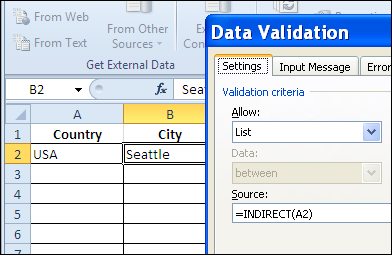 So, if you selected USA in cell A2, dependent drop down list shows cities from the range named USA.

With that simple INDIRECT formula, the drop down list in column B does NOT work, if no country is selected in column A. 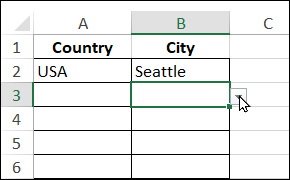 Add IF Function to Formula

Instead of a drop down arrow that doesn't work, we'll change the dependent drop down formula, and add the IF function. The revised formula will give users the option to select a World city, if they haven’t selected a country in column A.

On the Lists worksheet, there’s another range, named World, highlighted in the screen shot below. 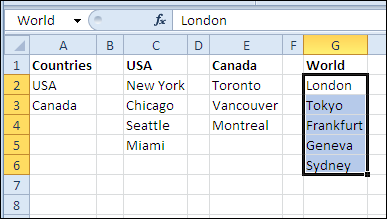 Just as you can use the IF function on the worksheet, you can use it in a data validation formula.

For the dependent drop down cells in column B, we’ll change the formula to the following:

After this change to the data validation formula, if you click on a drop down arrow in column B, and no country is selected in column A, the list of world cities appears.

How the IF Formula Works

Here's what the revised formula does: 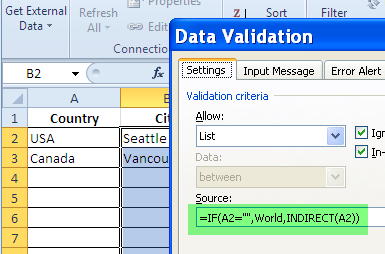 With this dependent drop down technique, from AlexJ, you can see a full list of customers in a drop down list. Or, switch to a short list, with just your top customers. The technique is driven by a formula -- no macros required.

This short video shows the steps, and there are written steps below the video.

Set Up the Lists

The first step is to create two named lists -- they will be used as the source for the drop down lists. 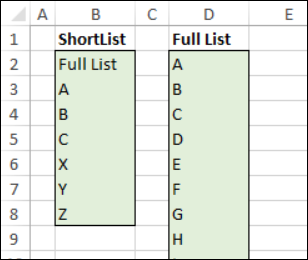 Next, you'll create the drop down list, by using data validation with an IF formula: 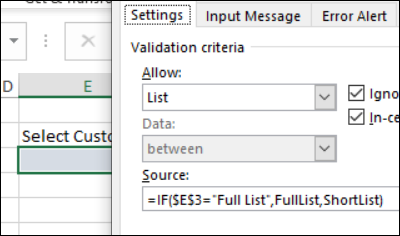 If the cell does not contain the text "Full List", the drop down will show the short list of top customers. 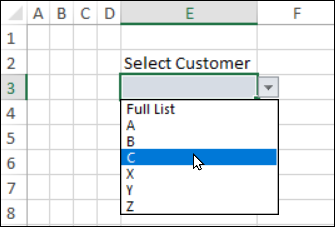 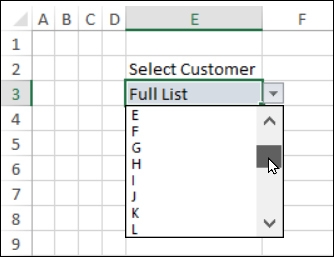 After someone selects an item from a dependent drop down, they could go back to the main drop down, and select a different item. That could result in mismatched items in that row.

For example, Fruit could be selected from the main drop down, and then Lemon in the dependent drop down. If Fruit is changed to Vegetable later, the Lemon selection would be incorrect -- it's not a vegetable.

To prevent invalid selections, here are a couple of techniques that you can use

Block Changes in First Drop Down

To block changes to the first list, you can change the data validation formula, so the list does not appear unless the second cell is empty. This video shows you how this technique works, and written instructions are below the video.

Block Changes in First Drop Down

With dependent drop down lists, problems can occur, if someone goes back to the first list, and changes it. Then, the first and second selections are mismatched -- for example, in the screen shot below, Vegetable is the first choice, and Banana is selected in the second column.

To block changes to the first list, you can change the data validation formula, so the list doesn't work unless the second cell is empty. 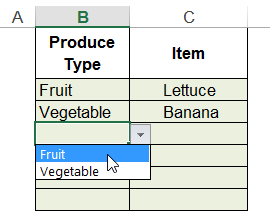 Instead of just referring to the Produce range for the Produce Type drop down, the formula will check for an entry in the Item column.

To change the formula:

Now, the drop down in the first column won't work if the Item has been selected in that row.

In the previous section, the data validation formula was designed to prevent selections from the first drop down, if the cell to the right contained data.

Another option is to use a macro, to clear the dependent cell, after making a selecting in the first drop down. That will prevent mismatched selections.

In this example, column B contains a drop down list of Regions. After you select a Region, the drop down list in column C shows the customers in the selected region. 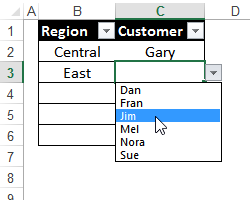 Go back and select a different region, and the existing customer name will be cleared.

When you select a Region, event code clears the cell to the right. To add the code, right-click the sheet tab, and click View Code.

NOTE: There are other techniques for setting up dependent drop down lists, so see which setup method might be best for your needs.

Dependent Drop Down from Dynamic Arrays